On Friday 1st July year five and six visited Peterborough cathedral to take part in the Peterborough Heritage festival. The festival is an annual celebration of the history of Peterborough.

When we arrived our first activity was to learn about the Vikings and the Saxons. A Viking lord showed us several of his men and explained how they dressed and the weapons they used. We learnt a lot of information such as the Vikings called any blade with one cutting edge a knife even if it was nearly a metre long!

The children then had the opportunity to have a ‘battle’ against the ‘Saxons’ from Gladstone Primary School. They had to face up to each other and have a shouting contest. All the children engaged fully with this and it was very difficult to say which side were the winners.

The rest of the day was spent trying to find out about a mystical ring which had been worn by different figures from history at important times such as when there might be an invasion. We visited the Romans, Edith Cavell, the medieval times and the English Civil War. The children listened to characters from the past talking about their life and saw demonstrations of Roman battle tactics, medieval music and the types of weapons used during the civil war. It was very informative as well as being great fun. 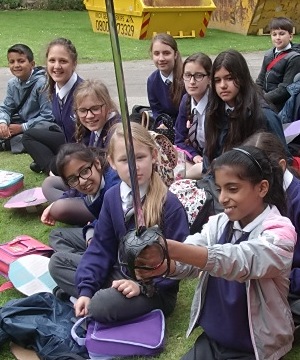