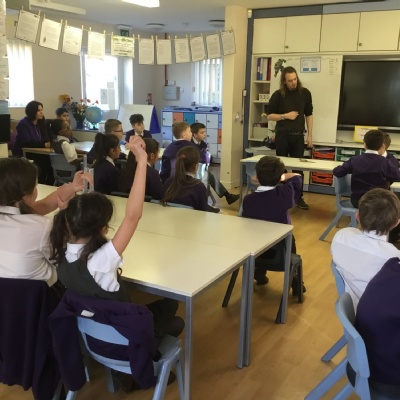 Today, Year 6 had the opportunity learn about our current theme topic, Evolution and Inheritance, in an interactive and exciting way! Chris and his team of interesting, exotic animals, from ZooLab visited Bishop Creighton to spend the afternoon talking about evolution and adaptation. Not only did we learn an abundance of facts about a range of animals and how they have adapted, we also got to handle these intriguing creatures too!

Today, Year 6 had the opportunity learn about our current theme topic, Evolution and Inheritance, in an interactive and exciting way! Chris and his team of interesting, exotic animals, from ZooLab visited Bishop Creighton to spend the afternoon talking about evolution and adaptation. Not only did we learn an abundance of facts about a range of animals and how they have adapted, we also got to handle these intriguing creatures too! 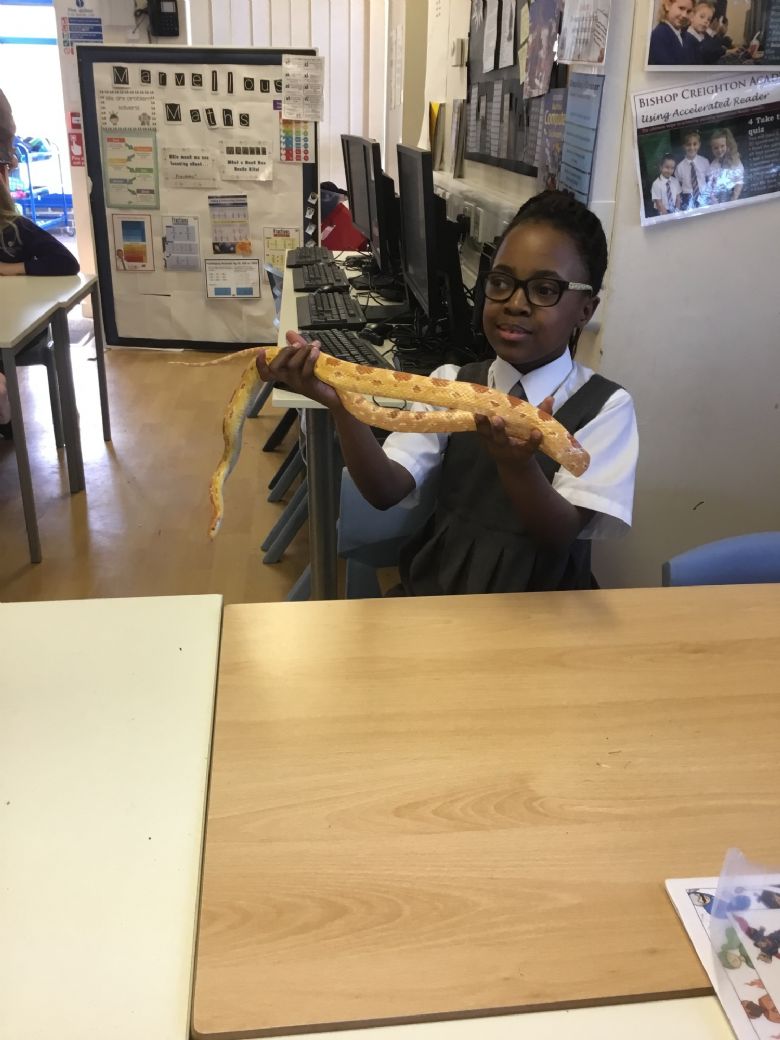 Fanta is a corn snake! They can grow to 1.5m long and will often live for around 20 years! He was orange in colour, covered in beautiful patterns; these are used to help him camouflage himself in the environment.  As corn snakes are cold blooded, they don’t require a huge amount of food like us warm-blooded humans, therefore he eats one mouse a week! After everyone had a hold, we got to ask lots of questions! Through this we found out:

*Snakes have more bones than humans, despite being bendy and flexible!

*Snakes have thousands of muscles

*Fanta sheds his skins two to three times a year

George is around 5 years old and will live for around 10 years. He is green in colour to camouflage with the leaves. He felt relatively cold when touched, due to being a cold blooded animal. Tree frogs can be found all over the world, except for Antarctica. The majority of the species live in Central and South America, where they make their home in the rainforest. A lot of these frogs live in trees and are great jumpers, to ensure they can climb waxy leaves and trees they have sticky pads on their feet!

Tarantulas are known as living fossils because they are the most primitive spider - they haven't changed in millions of years. Other animals like this are: jelly fish, scorpions, sharks and tortoises. Animals don’t evolve if their environment is stable.

Everyone had lots of questions about Rosey, we found out:

*There are 800 species of tarantula

*Most spiders are blind, they use the hairs on their body to feel vibrations.

*If they lose a leg they can regenerate one 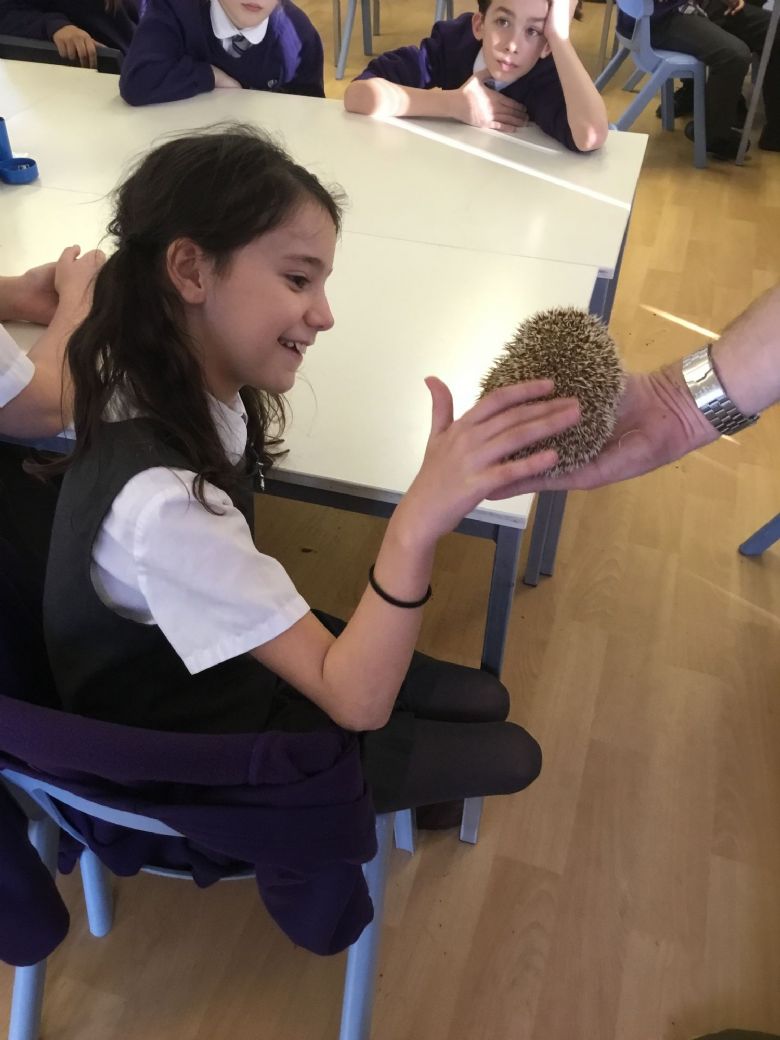 Pickles is 5 years old and has around two and a half thousand spines covering her body. Spines are actually thick, sharp hair. This is an example of evolution, and how the African hedgehog has evolved to protect itself and survive. The African hedgehog is much smaller than hedgehogs we find in the United Kingdom, they are also lighter in colour so their white stomachs can reflect the heat from the desert. We found out that hedgehogs are insectivores and are similar to moles, shrews and bats! 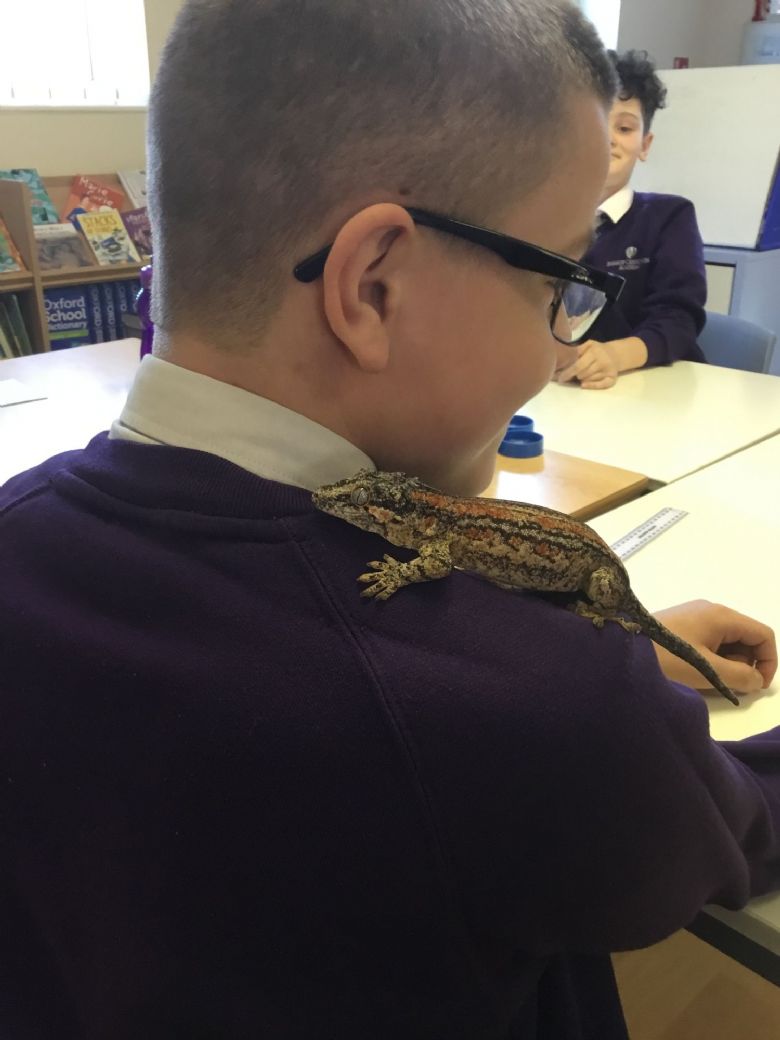 We were extremely lucky to meet Petrie, the New Caledonian Giant Gecko which is the largest living gecko in the world! Chris explained that he only brings him out around once a year because he's very valuable and part of an important breeding programme. Unfortunately, due to changes in environment, these beautiful creatures could be extinct in ten years! He was much bigger than Amber the Gecko and would probably eat her if he had a chance!

Today was one of the first times Butterscotch had visited a school, she's only a couple of months old! For this reason, we needed to be incredibly quiet so we wouldn't scare her. Guinea Pigs are small, sociable, 'chatty' rodents. There are different breeds and varieties of guinea pigs, with a wide variety of colour and coat lengths. Typically guinea pigs live for 5-6 years, but some may live longer.

In addition to handling some of these animals, Chris told us all about Charles Darwin’s work and how specific animals have evolved and adapted to changing environments. What a fantastic experience meeting these fascinating creatures. We can now take everything we have learned today to support our learning throughout this topic.

You can find out more about these intriguing animals we handled today on the website below:  http://www.zoolabuk.com/en-us/ourteam/animals.aspx