What is static electricity? 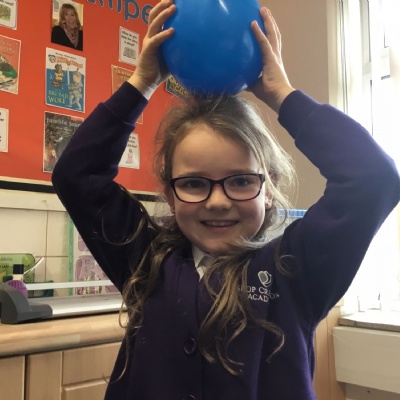 Before the 19th century, the only kind of electricity people really knew about or tried to use was static electricity...but what is it?

In Year 3, as part of our theme work about Electricity, we had to investigate static electricity. It was good fun! We created our own static electricity by rubbing balloons against wollen clothing and then used it to make our hair stand on end or pick up scraps of paper!

First we learnt all about the word 'static' - it means something that does not move.

Next we discovered that current electricity was only invented fairly recently in the 19th century.

Before this there was only static electricity...electricity that could not move! One of the people who helped to make the connection between static and current electricity was American statesman, publisher, and scientist Benjamin Franklin.

It is easy to see the effects of static electricity but much harder to understand why it occurs. Mrs Metcalfe tried to explain it to us! We even watched a video with a little scientist who explained it well too. Read on to learn all about static electricity:

Most people tend to think static electricity comes from rubbing things. So if you live in a home with nylon carpets and metal door handles, you'll soon learn that your body builds up a static charge when you walk across the floor, which can discharge when you touch a doorknob, giving you a tiny electric shock. Have you ever got a shock from a shopping trolley? In most school experiments, we also learn about static by rubbing things. Year 3 did this in class! Click here to see our photo album!

You might conclude from this that static electricity is somehow connected to friction—that it's the very act of rubbing something vigorously that produces a buildup of electrical energy.

It's not the rubbing that's important but the fact that we're bringing two different materials into contact. Rubbing two things together vigorously simply brings them into contact again and again—and it's this that produces the static electricity through a phenomenon known as 'triboelectricity'.

All materials are built from atoms, which have a positive central core (the nucleus) surrounded by a kind of fuzzy "cloud" of electrons, which are the really exciting bits. Now some atoms have a more powerful pull on electrons than others; a great deal of chemistry stems from that fact. If we put two different materials in contact, and one attracts electrons more than the other, it's possible for electrons to be pulled from one of the materials to the other. When we separate the materials, the electrons effectively jump ship to the material that attracts them most strongly. As a result, one of the materials has gained some extra electrons (and becomes negatively charged) while the other material has lost some electrons (and becomes positively charged).

Hey presto, we have static electricity! When we rub things together again and again, we increase the chances that more atoms will take part in this electron-swap, and that's why a static charge builds up.

Have a go yourself at home with a balloon! Have fun!