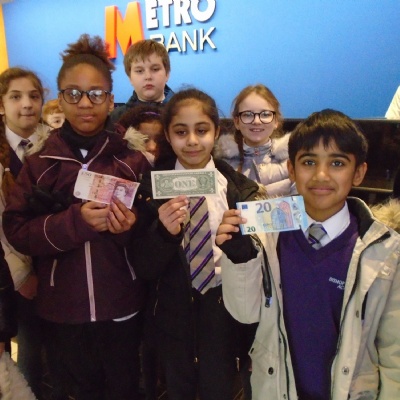 After Metro Bank had visited us in school to teach us about money, Year 5 spent the afternoon on Thursday 6th February at the Metro Bank  branch in Peterborough.  We were shown into the vault and saw all the safety deposit boxes (there were almost 3,000 boxes!).  A few children were given keys to the boxes, so we had to look round the room to find the right numbers and then opened them to find the valuables in each box.  Imagine our surprise when we found lollipops in the boxes and enough for one each!  After that, we learnt about the Magic Money machine and loaded some coins into the machine to be counted, after guessing how much money we were putting in there.  Pabiel was the closest with £6.00 and was awarded Class Dojos for his guess.  Other activities included looking at the machine that made credit cards, learning about different types of money and seeing where the bank kept their documents and cash.  At the end of the afternoon, we were given a goodie bag each and a Metro Bank bandana and treats for Arthur!