Our Visit to Flag Fen 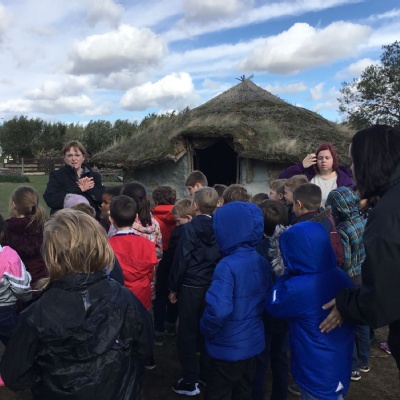 The wolves had an amazing first trip to Flag Fen to learn all about the Bronze Age.

On Friday, Year 3 set off on their first trip of the year to Flag Fen to learn all about pre-history. All the children were super excited and could not wait to get there.

We set off on the coach towards Flag Fen. On our journey the children were asking lots of questions about things we would be seeing and learning. We thought about what we are learning about in theme and how it might relate to our day ahead.

When we arrived we were greeted by Susan who explained that Flag Fen is an archaeological site and contains real artefacts from 3,500 years ago. The children were amazed and could not wait to see them.

We went inside and created a timeline to understand how long ago the Bronze Age was. Ayana represented today with a mobile phone and Grace represented the pre-historic dinosaur times with a dinosaur. We learnt that 250 million years after the dinosaurs was the Stone Age period, followed by the Bronze Age and Iron Age periods. Jaylen, Alfie ad Frankie were lucky to hold axes that would have been used in those ages.

After our discussion, we went on a tour around the site looking at all the artefacts from years ago. We saw boats from 3000 years ago made using a tree trunk. The children enjoyed sitting in a replica and experiencing what it would have been like for the Bronze Age people. We saw weapons and a real platform from thousands of years ago. We walked down a causeway that used to be a real Roman road. The children got into role of Roman soldiers with Jaylen as their leader. They marched down the road shouting commands in Latin. Year 3 made excellent Roman soldiers.

We finished our morning with a visit to a Bronze Age roundhouse. A fire was lit in the middle of a circle and we experienced what life would have been like in the past. We heard a story from the past about fairies and a magical sword. The children thought the story was not true but then the magical sword was revealed to us and we all got to make a wish. Hopefully they will come true!

After lunch, we handled some artefacts from the Bronze Age, Stone Age and Iron Age and we had to sort them into the correct ages. The children were really good at this and had lots of reasons as to where each artefact went. We were given a trick artefact that belonged to the Romans.

"I think this is the Romans as they could write on it and only Romans did writing," said Armandas.

He was correct and got to share his reasoning with everyone. Great work Armandas.

Our final activity was to make a Bronze Age clay pot. We made the pots in the same way Bronze Age people would have. We got to decorate them before returning back to the coach.

Year 3 had a fantastic day out and learnt so much about pre-history. We are excited to use what we have learnt in learning at school. Take a look at our photo album to see photos of what we did.