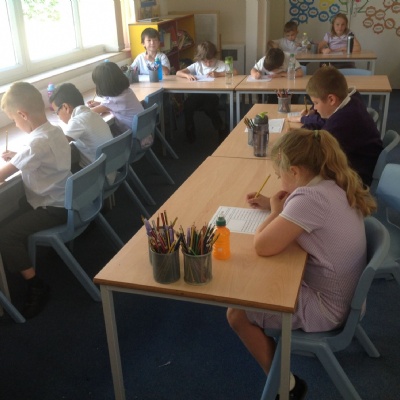 Welcome to our newspaper offices where our reporters have been writing up about BCA sports day.

The furniture in year 2 was moved around and a newspaper office was made. The children became the reporters and Mrs Thompson and Mrs Hicks the editor and sub editor. All the reporters were shown to their desks and were told whether they were a junior reporter, reporter or chief reporter. Two of the chief reporters went out into the academy to interview Mrs Redhead (principal) and Miss Snell (sports day organiser) and get their views on yesterdays events. The reporters were then able to use these in their reports.

The working day at the newspaper began and the reporters quickly got down to writing up the reports. They included detail of the different morning activities, the fantastic picnic with family and friends at lunch time and the races in the afternoon.

During the day they also had a 'tea break'.  For this the reporters had to leave their desks and go out side for fresh air and 'a cup of tea'. They also spent this time chatting, walking around to stretch their legs or  sun bathe!

The reports are now with the editor for checking and the reporters will then write up their final report in neat.

Look in Our Photos to see the reporters and work and during 'tea break'.