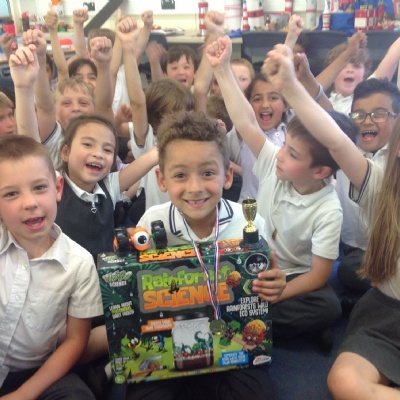 Year 2 have investigated during science week

This week has been science week and year 2 entered fully into it.

On Tuesday we visited the sea side where the children discovered more about materials and habitats. They worked out which was the best sand to use for building a sandcastle. This is what Emilas said 'If I use dry sand it collapses, but wet sand sticks together and my sand castle stays up'. Rock pools were studied closely by some children and they talked about what was living and growing in them. They were fascinated by the tiny crabs and a few brave children picked them up.

On Thursday we had a science afternoon and the children worked in groups on 2 investigations.

2. We went outside and the children were asked 'Can you make the Plasticine float?' After much experimenting the children realised that they had to change the shape of the Plasticine. They made it into a boat shape and then improved it by altering the size of the walls.

The whole academy were also set a challenge by Mss Greaves to make the best car which would travel the furthest going down a ramp. Year 2 chose to make a car from a construction kit. These were tested in the classroom and the best one was put into the final against the other classes. Our best car was made by Tyler. On Friday Tyler went onto the playground with the other finalists and the testing took place. It was very close between first and second but we were the winners.

Well done Tyler and year 2 for a fantastic science week.